Happy Thanksgiving to all readers in the USA!

Apologies for the lateness of this blog. I had planned to do another one last week while in Norway, but time ran away with itself. We’re back safe and sound now after a very successful tour and we visited some stunningly beautiful places. Here’s a photo from Solund… one of the Westerly islands off Norway. Just wow…

We’re now into the final stages of the album planning, so I’m going to be doing more regular blogs.

This week was the start of more intense rehearsals, and we’ve just had the third day in a row of just that. We’ve now 5 days off (in which I have to journey to both the Isle of Man and the Isle of Benbecula!) to reflect and practice in our own time, before we start pre-production in the actual studio.

We all live in Glasgow so we tend not to take whole days out to rehearse as we can afford to rehearse more regularly for shorter lengths of time rather than really long rehearsals, less regularly.

We prefer to have block rehearsals of 2/3 hours when we work on one set, perhaps touch on another, and then we either finish up, or we break for lunch then come back and do the same again. We all have other commitments and gigs when we’re at home here in Glasgow so it means we can easily schedule our shorter rehearsals round these.

Technology has developed so much in the past few years, even since I recorded my last album in 2012. We’re really using it to our advantage when both preparing for and during our rehearsals for this next album. 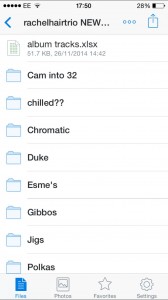 Once I’ve decided on a set, I write out the melodies on Sibelius and add it to a Dropbox “RHTrio new album” folder that we all have access to. I also record just the tune on my iPhone’s voice memo recorder and upload it to the same folder.

A couple of days before the rehearsal I let Cammy and Jenn know what set we’ll be working on and it means before they come they can look and listen to the tunes in the dropbox, which gives them a head start in thinking of arrangement ideas.

Dropbox is so useful for allowing us to have everything in one place. We arrange it all into a folder per set and during rehearsals we are constantly adding to the folder. We have our laptops open during the rehearsals meaning that we can change melodies, add harmonies or bass lines to the Sibelius files so we have a record of what we’ve done. There’s nothing more frustrating than coming up with ideas and forgetting it by the next rehearsal so we record our rehearsals on our iPhones as we go along. Any playing we do we record on the voice recorder, whether it’s riff or chord ideas or fully formed arranged tunes. 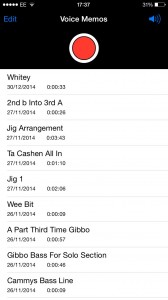 These are then named as soon as they’re stopped recording (sooo important to rename your iPhone voice memos!) and then uploaded to the dropbox.

When we come back to play the stuff again we listen back to the latest recording to remind us what we did.

We still use old fashioned pen and paper to write our chord charts and notes, though even then we tend to take photos with our iPhones so we have a record “on the cloud (iPhoto)” so that even if we loose the paper or forget where we put it, we have a record online.

We do like to use our gadgets, but you know when you have them and they can make your ever busy life easier, you might as well use them. So often, after rehearsal we’re running off to do other things and arrangements can be forgotten by the next time you sit at your instrument. With 3 instruments, 2 of which have a role of accompanying we really find it important to concretely arrange our sets so that we can ensure we’re tight and not clashing, meaning we have a lot more to remember than just the tune, and these tools all help us do this. 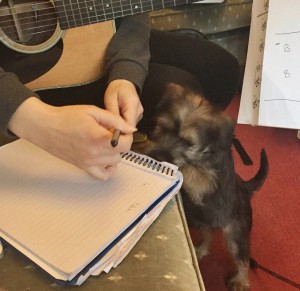 So today’s rehearsal went really well. We finalised the arrangement of a set of jigs and a set of polkas.

We rehearsed for the first time at Cammy’s house, which was the best thing ever… because Cammy and his partner (the wonderful harper Gillian Fleetwood) got a puppy 2 days ago! He is sooooo cute! A beautiful border terrier called Rusty. He’s so small and we enjoyed many a cuddle before we started.

We did let him into the rehearsal room for a while after our lunch, but bless, he had to be put away as he just got a little bit too interested in Jenn’s laces, my feet, the bottom of Cammy’s bass and (above) Jenn’s notebook!

Last weekend I got to see the amazing American fiddle player Casey Driessen perform solo at the Edinburgh Fiddle Festival. It was so good to see him live and it’s amazing to hear the pieces he creates as a soloist with just his fiddle and well, many, many pedals.