Budgetting. Argh. It’s a scary word, but my goodness it’s essential to budget things when recording and releasing an album, especially when you’re self releasing.

I knew roughly how much I wanted to spend on this album, partly through experience of recording 3 other albums. I really wanted to stick close to what I was wanting to spend, as well, I want to make back what I put into it money wise reasonably quickly, as it’s been rather a lot of money.

I see there being 4 sections of big money spending when you’re self-releasing an album. To work out my costs, I put these into an excel spreadsheet. I’m hopeless at excel and can only do the basics, so my spreadsheet wasn’t fancy, but it helped having it all on one page.

For all of these I put in how much I was planning to spend.

Some of these I knew exactly how much would cost (recording costs, and post recording costs) but things like the MCPS license and the cost of new photos I had to estimate, but based on previous album costs. I also had a surplus fund of £1000 that I worked in to cover “extra” costs.

So far I’ve been really pleased that I’ve stuck to the budget. We’ve saved in some aspects (mixing didn’t take as long) and we ended up having a few extra recording days after Christmas in a different studio, which was more expensive, but it still came under the “extra” cost which was a relief.

It really helps to put everything in a spreadsheet so I really do recommend that you do this. Just helps you keep and eye on things so you don’t get any nasty shocks! 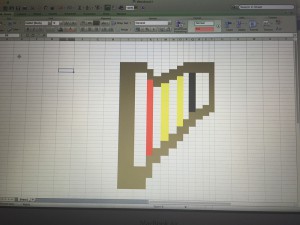 I paid for the album myself, and I also put on the spreadsheet where my income for that was coming from. As soon as the income came in I would move it to a separate “album” bank account, where everything would be paid from. I totally recommend keeping a separate account for this kind of thing… just so you don’t go accidently spending it!

I’m waiting just now to see how much I’m going to be spending on the actual printing of the cd. I’m very lucky in that my boyfriend is a website designer who is a dab hand at cd artwork too. This has meant I don’t have to spend anything on that.

I have a maximum budget for what I want to spend on the cd manufacture but I’m waiting to get a quote back from the printers to see how much it is to use a special kind of gloss print over a matt cover. Extras cost so I’ll see if it fits into the budget or not…

Next blog I’ll talk about the whole ISRC, MCPS, PRS, PPL malarkey. So many letters, so much confusion….!