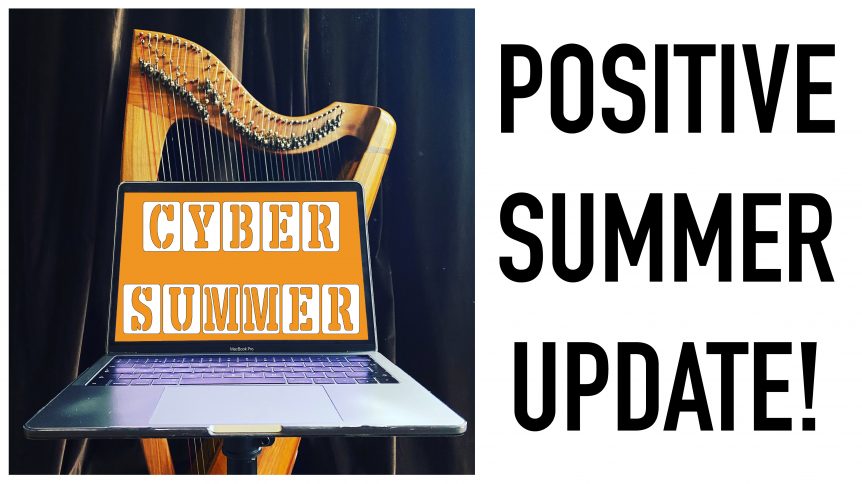 So life is very different to this time last year, but hey, I’m embracing it and it turns out I’m keeping very busy! Here’s a wee update on some things that have been happening:

The Ohio Scottish Arts School, Common Ground on the Hill and Somerset Folk Harp Festival ARE ALL GOING ONLINE – YAY!!! I’m so happy about this, it means I’m getting to still interact with the harpers in America via zoom lessons and workshops. Check out the gig page for individual links.

We spent a wonderful day in the sunny Trossachs, North of Glasgow filming various sets for festivals that are going online. We filmed a 25 minute set for Somerset Folk Harp Festival, a set for OSAS, and a couple of numbers for Sidmouth Folk Festival which is also launching a virtual festival. Well done to all the organisers for going for it! 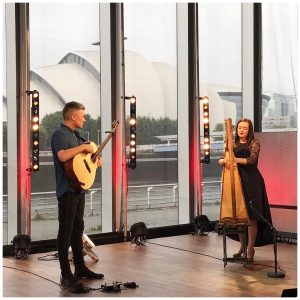 My last gig was 2 days before lockdown where I filmed a set for the first episode of the weekly Reflections at the Quay show for BBC Scotland. I returned there this week to film another few numbers, this time with my fiancé, bouzouki player Adam Rhodes (Imar, Mec Lir, Angelo Kelly). One of these will be broadcast on Sunday 5th July and they’re keeping the other 2 sets we filmed for later episodes. I’m also thrilled that they’re still using a tune from my Lucky Smile album as the theme music!  You can search for the show on the BBC iPlayer or catch it on BBC One (Scotland region) at 11.45am every Sunday.

I’ve just completed my 1st series of HARP at HOME with Rachel Hair… and wow I did not expect it to be the success it has been! I filmed 9 workshops where I taught my fave tunes, had guests interviewed, and had a wee blether to the camera! I’ve had hundreds of folk take part all over the world. Series 2 will be released weekly in August. You can still catch up via the HARP at HOME tab in this website.

Be sure to check out the video we released a few weeks ago, that until we filmed in the Trossachs a few days ago, was the last time Ron and I played together! We had a wonderful time filming on the beach in Waihi, North island of New Zealand. Paradise! Check it out on the video page.